Art You Can Hit Stuff With ~ CD Olano

I’ve said it before and I’m sure I’ll say it again, “Human beings really seem to love hitting things with sticks.” That’s just pure undeniable truth right there. You take a little kid on a nature walk through the woods and that child will pick up a stick. They will use it to poke and hit and swing about. At times, you will have to jump out of the way, fearing for your very life. They seek out the best stick, whether the longest, and straightest, or pokiest, or with the perfect bend at one end that fits just right in their hand. Pool players aren’t much different. We are still those kids, traipsing about the pool hall jungle, wielding, or in search of, the perfect stick; the one that will serve as the perfect tool, the one that will bring us victory in battle.

Patrick Diveney is a man who has made it his life’s work to supply the kid in each of us with the perfect stick. His commitment to perfection shows in his work. The word that came to mind as I desirously scanned photo after photo of his beautiful cues, and the word that I have seen most frequently in reviews of Diveney custom cues, is “solid.” On the AZ Billiards forum, a reviewer calling himself Cuejunky wrote, “ (It) Has that nice sound when you hit with it, if you know what I mean.” Anyone who has handled their share of sticks knows exactly what he means. The indescribable sound of an perfect cue hitting just right is one of life’s simple pleasures. 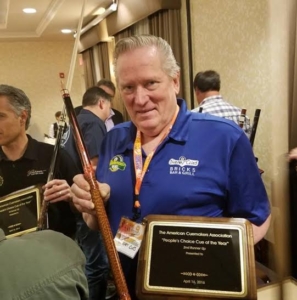 I was a late bloomer in the world of pool hall junkies. I went to a pool hall a couple years ago to watch a fellow shoot league, and I was hooked; firstly, because of the spirit of camaraderie displayed by the players and secondly, because of the cues. Having only ever really seen pool being played in a handful of bar rooms, I had never seen the glory of a McDermott or the luxurious inlays of a Meucci. For months I could be seen inspecting cue after cue, looking at the materials, the inlays, the points, the stains, the finishes, the wraps, the etchings, the collars…

A beautiful hand crafted cue is a work of art, but it’s so much more than that, because it is art that you play with. It is functional art. It is art that is built to withstand being continually whacked into things. It is art that becomes a valued extension of the player.

Diveney’s cues are the epitome of functional art. He uses the finest materials he can get his hands on. The deep finishes set aglow the natural beauty of the woods he works with and he pairs natural tones with vibrant hues; fiery oranges and reds, electric magentas and lively greens, soft lilacs and deep blues. He is best known for his “butterfly hustler” cues, and I can tell you I have developed a deep desire to own one some day. As I admired the graceful fluid simplicity of the flowing geometric lines, I was truly awed.

He acquired a passion for the game at a young age and began dealing cues and doing repairs. Inventors and craftsmen tend to have a little voice inside them that says, “you can do this, and you can do it better.” Listening to that little voice, he sold his collection of antique Harley Davidsons and bought the materials necessary to begin making cues. 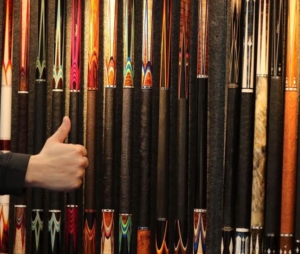 Diveney has been crafting cues out of his workshop in West Liberty Iowa for nearly 20 years now. He runs a one man operation, with a bit of help from his family, out of a garage that has never homed a car. It has become a home instead for mills, inlay machines, saws and all the raw materials which he meticulously transforms into sticks worthy of being wielded by the best kids on the block. He is well on his way to securing a place on the list of top legendary cue makers. On April 16th of this year, he was awarded second runner up for the “People’s Choice Cue of the Year” by The American Cue Makers Association.

Diveney’s cues are easily identified by the P. Diveny signature on the forearm of the majority of his cues. Specialty cues are signed Patrick G. Diveney. Cues built after 2005 can be identified by custom bumpers imprinted with the initials PD within a circular Q. For more information on acquiring a cue of your own, you can check out www.diveneycue.com.

SPM Magazine Issue 29 Featuring "The Silent Assassin" The Story of Tony Robles and so much more...