If you have never seen a Junior Player start his career, then you are missing out.Logan Briggs, a four foot, six year old, Northern Ohio NAPA League Junior player from Toledo, Ohio, will show you how dedication and focus,not physical appearance can make you a winner This 6 year old possesses not only ball making skills on the table, but the mindset to play the strategically defensive (Safeties) strategies that a veteran adult player would use. 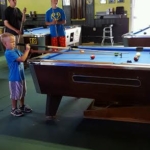 Logan, who is mentored by his father Ryan (A Veteran Pool Player), possesses the heart of a lion with the sportsmanship any parent would be proud of. He has great supporting cast from his mother “Jackie” and brother “Lukas” (15 years old), who is a stellar junior player as well. Lukas plays the game as a hobby, where as, Logan has the total love for the game of pool. Lukas will also give his brother some pointers and tons of encouragement in any aspect of the game.

Logins smile, character, and play earned him the Most Valuable Character Award in his first session of playing.This recent winter session he took 2nd place in his second league ever and qualified for the 2016 NAPA National Juniors Tournament in Valley Forge, Pennsylvania. Logan then participated in his first junior tournament, in his area, and captured 3rd place (missing the 8-Ball to make the finals). 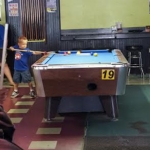 Watching Logan, who is almost shorter than his stick, flows around the table with smiles and focus. When first seeing him your reaction is excitement, when watching him play he turns you into a fan. Logan is the true meaning of a Junior League class act. The sky is the limit in pool for this talented junior and if you ever meet him in person he will lighten up any pool hall he attends with his cute voice and toe head look.

Already being a local celebrity, in the pool world, by playing on a local sports channel covering the league he is on, gives him the exposure he deserves. Watching Logan play someone two feet taller, 10 years older, and years of more experience is unbelievable, especially when the outcome is in his favor. There is no fear, hesitation, or shyness away from any opponent. He chalks up, shakes the opponent’s hand, smiles, and says “Good Luck”. Dedication, having fun, sportsmanship, and focus makes Logan The FACE FOR ANY JUNIOR POOL PLAYER. Remember the name Logan Briggs because he will someday not only be a local star, but a National icon. 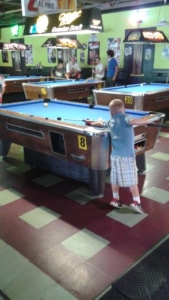 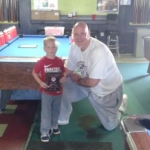