The game is 9-ball here.  In Diagram 1, the cue ball is frozen to the 8-ball and their line of centers are aimed to miss to the right hand corner of the pocket. The 9-ball is on the same end of the table. How would you make the 8-ball and also get position for the 9-ball? 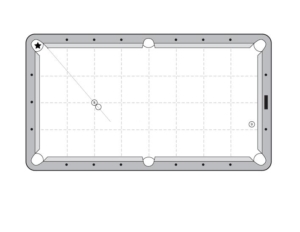 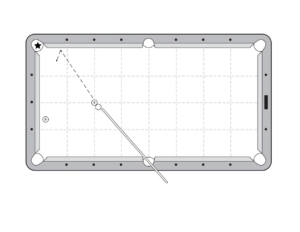 Jacqueline Karol is known as “The Angel of Billiards.” She began playing pool when she was three years old. Her father, a nuclear engineer, introduced her to the game and taught her the fundamentals. In 2002, Jackie began training full time with world-renowned billiards coach and columnist Tom Ross of Denver, CO. Her first goal was to win the 2003 BCA National 8-Ball Championship. Her hard work paid off and she went on to become the 2003 Billiard Congress of America’s 8-Ball and trick shot champion. Jacqueline now lives in Northern California and offers a variety of training programs. You can check her out at her website.

SPM TV Brings The Drill Instructor, Dominic Esposito! "How To Learn to Shoot a Shot Right!

One Rail Kicking with The Tip Kick Method